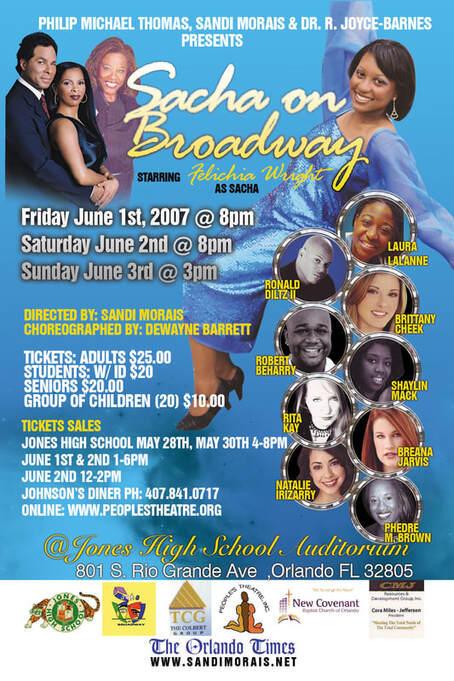 
The power of your imagination can take you anywhere. If you don’t believe that, just ask Felichia Wright, the star of Sacha on Broadway. Ms. Wright is an upcoming junior at the University of Central Florida. But, her main job these days is portraying the lead character in, Sacha on Broadway. Who is Sacha? Well, I’m so glad that you asked. A story about a young woman who has big dreams of performing on Broadway is the focal point of this play. She ultimately realizes that the power from within is the key to success. However, like any goal in your life, obstacles are sure to follow.

There would be no real story without the villains, right? In this play, there are plenty that challenge Sacha and discourage her from making it to Broadway. These people reminded her that she was not good enough and that she was wasting her time. Like any group, there is a leader. Harriet the Owl is truly mean. It is her job to scare Sacha and it works. Believe me; if you saw Harriet the Owl; you’d be afraid, too!  Harriet the Owl is scary, but not her alter ego, Phedre M. Brown is a loving mother and a promising actress in her own right. Mrs. Brown plays a dual role in this play as Sacha’s mother and Harriet the Owl. She has been performing for many years, including having been classically trained in voice at the famed Florida Agricultural and Mechanical University.  “Working with this play has been a blessing and I am challenged more and more by portraying two roles. At one point I am helping Sacha as her mother, but then Harriet the Owl tries to destroy her,” says Phedre.

Luckily Sacha has a Magic Goodmother. Don’t we all need that? That special someone who is right there just when we are about to give up makes all the difference. Sound like a fairytale story? Well, it really is. The vocal talents of Rita Kay are undeniable. What a powerful voice! Believe me, the singing between Phedre and Rita makes this play worth it.

What would a play be without a supporting cast? Through Sacha’s imagination, she meets many characters that help and hurt her in her quest to Broadway. The talents of Robert Beharry (Martin the Frog), Natalie Irizarry (Rita the Rat), Laura LaLanne (Dolly the Duck), Shaylin Mack (Polliwog), Brittany Cheek (Polliwog), James Brown (King Akaash), and Ronald Diltz (Ego) complete this amazing play.

A special bonus for the Orlando audience was the talent of Dewayne Barrett who served as the choreographer for Sacha on Broadway. Having choreographed all over the world for A Chorus Line and West Side Story, Mr. Barrett didn’t disappoint. No one will forget the fancy foot work by Rita the Rat any time soon.

Central Florida is becoming a performing arts haven for many artists who are looking to expand their horizons in this very lucrative field. Dr. Ruth Joyce Colbert-Barnes is truly serving as one of the advocates for the arts. Her company, the Colbert Group brought this play to Orlando. To top it off, the play was held at the famous Jones High School, a local celebrity on its own. “Keeping our heritage alive through the arts helps so many of our students ascertain scholarships for college.” says Dr. Barnes. Dr. Barnes, along with local sponsors made Sacha on Broadway a reality. Dr. Barnes has plans to bring more plays to Orlando and although she can’t reveal them yet, you’ll see them very soon.

So, behind every great play, is a visionary who sees potential before reality. Sandi Morais, Director and Co-writer of this family musical is more than a professional fitness expert, teacher and actress. And, she’s more than a pretty face, too. She has a passion for people who aspire to go for their dreams and does her best to get them there. Before she knew it, Sacha on Broadway was born.

“Everyone can relate to Sacha on Broadway. It’s not just for young girls. Men can identify with having a dream and all the work that comes along with it,” chimes in Phillip Michael Thomas. Yes, THAT one.

Having been business partners for more than twenty years, Sandi Morais and Philip Michael Thomas are in a way…Sacha’s parents. After all, they gave her life. They made her real and she’s been growing for almost seven years now, including having performed at Hampton University.

Philip Michael Thomas is no stranger to the stage. He is the renowned 1980s icon from the hit television series, Miami Vice. Ricardo Tubbs earned him a permanent place in history as the sexy, good-looking detective who wore pastels like no other. Sandi, Dr. Barnes and Philip have been doing several interviews and they even stopped by my talk show, Hip & Happening to discus the show. After twenty years, he’s still gorgeous.

Philip serves as the Executive Producer and Co-writer for Sasha on Broadway and he is the composer of all the music and lyrics featured in the play.

Opening night was complete with a Red Carpet Interviews sponsored by Jericho Broadcasting Networks and ONYX Magazine. On Friday, June 1, 2007 all eyes were headed to Jones High School. A crowd of over 700 enjoyed Sacha and her journey through her imagination. Roy M. Eavins, CEO of Jericho also provided a live streaming broadcast during the red carper that you can view.

If you are not enticed by now, I don’t know what to say. Thankfully, Dr. Barnes, Philip Michael Thomas and Sandi Morais are bringing this enchanting musical love story Sasha on Broadway back to Orlando soon.  They even plan to take Sacha on Broadway on a mini tour to Daytona, Tampa and Jacksonville.  So, check local listings for details.
What are your dreams? If you catch Sacha on Broadway she’ll help you get there!